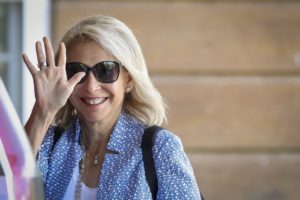 The combination of CBS and Viacom is a victory for Shari Redstone (photo), the leader of a family business that controls both companies.CreditCreditDrew Angerer/Getty Images

After more than a decade apart, CBS and Viacom, both under her control, agreed to merge on Tuesday in a deal that will reunite a roster of once-mighty media businesses. Viacom’s Paramount film studio and MTV and Nickelodeon cable networks will be added to the broadcast giant CBS and the book publisher Simon & Schuster.

The deal will allow the company to invest more in streaming, which is the future of entertainment. CBS already has a thriving digital television service with original series, including the forthcoming “Star Trek: Picard,” and Viacom owns an ad-supported streaming service called Pluto TV.

With the merger, CBS’s digital service could see the addition of children’s content from Nickelodeon, and Pluto TV could include some of CBS’s ad-driven digital networks like its 24-hour sports news service CBS Sports HQ. The companies can also negotiate for better terms with pay-TV operators, which could make cable bills more expensive.

The combination of CBS and Viacom is a victory for Ms. Redstone, the leader of a family business that has led the two media giants for two decades. The two companies were once a single entity, called Viacom, until they were split up in 2006, and their reunification was seen as necessary at a time when television audiences have eroded. Tech platforms like YouTube, Instagram and Netflix have chipped away at big media, eating into the once-fat profits that companies like CBS and Viacom reaped.

Ms. Redstone had pushed for a deal for at least three years but faced fierce opposition from CBS’s board, including its former chief executive, Leslie Moonves. Mr. Moonves was pushed out last September after several women accused him of sexual assault, charges that he has denied. Ms. Redstone will be chairwoman of the combined company.

“I am really excited to see these two great companies come together so that they can realize the incredible power of their combined assets,” she said in a statement. “We will establish a world-class, multiplatform media organization that is well-positioned for growth in a rapidly transforming industry.”

Viacom’s chief executive, Robert M. Bakish, will lead the combined company, which will be called ViacomCBS, and Joseph Ianniello, the CBS acting chief executive, will remain as head of a newly designated CBS unit, the boards of both businesses said in a statement.

When the two companies split, Viacom’s cable networks were seen as the faster-growing business and CBS the aging, out-of-step broadcaster. Fortunes reversed in the last decade as CBS became the most-watched television network and Viacom’s youth-centered channels were eviscerated by the internet.

But the combination of CBS and Viacom amounts to a fraction of those deals, underscoring the need for such a merger. The deal is what is known as a stock swap, and values Viacom at about $11 billion as of Monday’s closing market price. The combined company also expects to see about $500 million in cost savings, which typically come in the form of layoffs.

Under the swap, an investor with 1,000 shares of Viacom would receive 596.25 shares of CBS. CBS shareholders will in effect own about 60 percent of the combined business. The deal does not include any cash, making it a tax-free transaction.

The offices of CBS in New York. Its reunification with Viacom was seen as necessary at a time when audiences across television have eroded.CreditJeenah Moon for The New York Times

The media industry’s decades-long success had been contingent on people continuing to pay for cable television, and customers have been cutting the cord for years. The inexorable shift toward digital entertainment has profoundly reshaped the industry’s economics. Netflix, for example, has a significant lead with more than 151 million subscribers around the world while the rest of the media industry — including CBS and Viacom — are still at a fraction of that size. CBS’s streaming platforms, CBS All Access and Showtime, have about eight million subscribers in the United States.

Still, it’s better late than never. “Like all good things, it was worth the wait,” Mr. Bakish said in an interview. “We’re really creating a global premium powerhouse.”

He listed a three-part strategy that includes selling more streaming subscriptions, elevating its digital advertising sales and creating many more original shows for other streaming platforms, including Netflix. The company aims to be both a wholesaler and a direct-to-consumer business for digital television.

“Together, Viacom and CBS will become a significant player,” he said.

The deal is an important moment for Ms. Redstone, who has long waited in the shadow of her father, Sumner Redstone, the combative, cantankerous entrepreneur who over decades forged a media empire through a series of mergers bankrolled by big loans. He built a corporate empire only to dangle succession in front of his daughter, creating a caustic relationship that led to one of the most bitter family disputes in corporate America.

Ms. Redstone, who has been vacationing in Greece with her family, was not present during the negotiations, but her ascent in the business is sure to portend further deals for the company. She has started to weigh the possibility of snapping up other media businesses after the merger, several people familiar with her thinking have said. She has considered the few media companies remaining, including the cable network Starz, which has a budding international business, and Sony Entertainment, which has a large television production business.

The boards of both companies had been locked in negotiations over the last few months, haggling over the value of the transaction and the management team, in particular the role of Mr. Ianniello, whose employment agreement included a hefty severance package if he was not named chief executive of the current CBS. Mr. Ianniello will have a new role in the company running a newly created division housing all of CBS’s brands, including the digital service, and will receive a $69 million payout based on his agreement.

“Because I know these assets so well, I know the most about them, it made sense to oversee those assets,” Mr. Ianniello said in an interview. “That made the most sense, and it allows me to get even closer to the business than I could as a C.E.O.”

Mario J. Gabelli, the chief executive of Gamco Investors, which owns more than 9 percent of Viacom’s controlling shares and 13 percent of CBS’s controlling shares, said the merger took a long time to consummate. “It was a marriage made in hell but it’s done,” he said, adding that the business needed to speed up its push into streaming.

“They’re going to have to jump into it more aggressively,” he said. “The digital world gives the consumer what they want at a lower cost and you’re going to figure out how to do that.”

Both companies have experienced a decline in ad revenue as well as a slowdown in the licensing fees paid by distributors like Comcast and Dish as cord-cutting takes a bite out of business. The largest pay-television businesses lost a combined 2.9 million subscribers last year with 2.8 million more fleeing in the first half of 2019.

In a touch of irony, when CBS and Viacom were split, Mr. Bakish, then a rising executive at the company, was a key architect of the separation. He helped sort out which units would go with CBS, such as Simon & Schuster, and what would remain under Viacom, like Paramount.

“I’ve seen the businesses evolve,” Mr. Bakish said. “That was a decision that everyone thought made sense for the time, and what we’re doing today makes sense for now. Everything’s changed.”